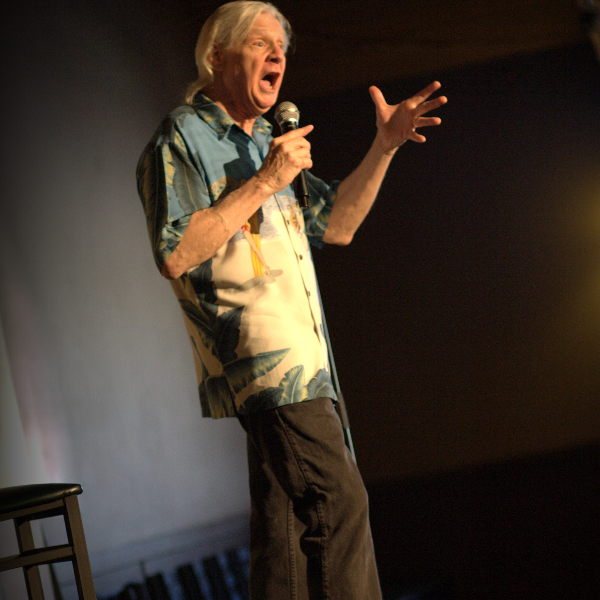 Doors open 15 minutes prior to showtime.

All Shows 21 and older

All Sales Are Final - No Refunds

Video recording of events and flash photography not allowed. Cell phone use not allowed in showroom. Card subject to change.

Patron, be advised that by entering Fort Wayne Comedy Club/469 Sports & Spirits, you consent to your voice, and likeness being used, without compensation, in video and photography for exploitation in any and all media. Whether now known or hereafter devised. You release Fort Wayne Comedy Club/469 Sports & Spirits, it's vendors, successors, and licensees from any liabilities whatsoever of any nature.

Charlie Wiener has headlined comedy clubs across the United States and Canada for more than 30 years. He has been called ‘Too weird for New York’, manager of the Lone Star Café and ‘Too Midwestern’, both in L.A. and Dallas, we feel he is somewhere in between. Maybe too weird to be Midwestern or too funny to be categorized, we are not much on labels.

In that time people who have found him not too weird to work their rooms are Zanie’s in Chicago, Nashville, Mount Vernon and St. Charles, The Loony Bin in Wichita, Oklahoma City, Tulsa and Little Rock, Goodnight’s in Raleigh, The Admiral Theater, Bremerton, WA, The Improv, Catch a Rising Star in Reno, Providence, Princeton and Atlantic City, The Riviera and The Plaza in Las Vegas, Loonee’s in Colorado Springs, Cozzy’s in Newport News and Laff’s in Albuquerque and Tucson.

He has shared the stage with Ellen Degeneres, Bobcat Goldthwait, George Lopez, Gordon Lightfoot, Randy Newman, Meatloaf, Todd Rundgren, America, (the band not the whole country, tho’ close), Jefferson Starship and many, many others. He has performed in 49 states and several provinces of Canada as well as Dublin, Ireland, driving more than two and a half million miles and aging himself by a multiple of six. He is old, broke down and in pain which he bitches about almost constantly but that is what old people do best.

The father of two adult daughters and three very odd dogs, he has lived a full life but isn't ready to cash in his chips just yet. His greatest joy is taking the stage and promoting the concept of old people becoming a drag on the younger generation. Power to the old people!, is his battle cry and the audience follows. Well, they're in wheel chairs, walkers and leaning on canes, don't move very fast and need to stop to pee every few miles... but they follow. And the young see him as hope for their future. That maybe someday if they waste their lives they, too, will get to be bitter old people as well. And that life doesn't necessarily end at 25.

With appearances on A&E, Comedy Central, his own cable shows 'Off The Wall' and 'Wienervision', CBC, NBC, ABC and CBS as well as being heard regularly on XM radio he has brought the concept of having fun while piling on the years to an art form.

Charlie finds there is nothing funnier than everyday life - especially his. His subject matter ranges from travel to politics, road rage to stupid people, fatherhood to marriage, marriage to marriage to relationships back to marriage around the corner to sex (and lack thereof), Yes, it's high energy, fast paced and extremely hilarious.

For more than forty years in music and comedy, Charlie has proven himself to be the consummate entertainer and one of the most requested stand-up comedians working the road. Charlie Wiener, comedy with that old, old world edge. If wisdom comes with age does it not seem logical that cranky is right on its heel???

Much like other Korean girls who grew up in the 90s, Diana Hong spent most of her life playing competitive golf. After a year of an unsuccessful professional career, she decided to pursue her dream of making people laugh. A Sacramento native, Diana was the only child to immigrant parents at a time when Asians did not have a choice but to be the “model minority”. Diana uses humor to navigate living between cultures. Using her affably stoic personality charms and entertains audiences by sharing personal and social observations with satirical undertones. With life experiences ranging from professional athletics to retail and with personal trials in between, Diana is sure to entertain audiences from all walks of life.

As an up and comer, Diana has quickly become a local favorite. She has opened for the likes of Tom Rhodes, Rachel Feinstein, Aida Rodriguez, and Ms. Pat. In California, she regularly performs at distinguished clubs such as Laughs Unlimited, Tommy T’s in Rancho Cordova, and the Sacramento and San Francisco Punch Lines.